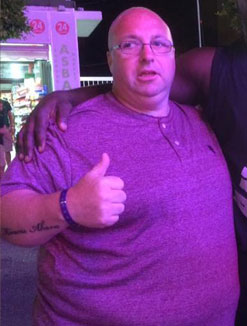 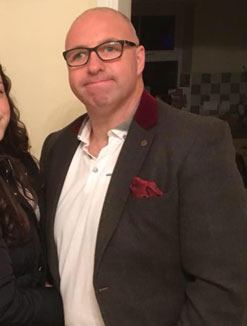 I have battled with my weight most of my life, yo yo diet after diet! Being a lover of food coupled with my job as a doorman meant I worked till the early hours sometimes not finishing till 3am. I ate at the wrong time of day for a number of years which included foods such as pizza’s and kebabs.

I then owned my own hotel and restaurant and had five very good chefs at my beck and call but my weight kept on increasing. I had a few personal problems which only added to the situation I found myself in, I became depressed over my weight and the more depressed I became the more I was turning to food for comfort.

I didn't drink or smoke so my only outlet was food! I would comfort eat if I was depressed and if I was happy or something went well in my life I would eat to celebrate, I JUST LOVED EATING!

Before I knew it, I was a man in my 40s and weighing in at a colossal 29 and half stone, I had no energy to do anything with my children, I couldn’t even walk up the stairs in my home without being out of breath. I had worrying health issues as well finding out I had fat clocking up my lungs.

One day I was having a conversation with a friend of mine who asked me had I ever thought about surgery? I responded saying, “no I don’t believe all that works.” She then told me it does work and can change people’s lives including her own, she went on to say she had undergone a weight loss procedure and lost 7st! She then showed me some photos, I thought about it at the time but presumed it would be out of my reach financially.

One day my 12 year old daughter who lives with me full time was sad and wouldn't tell me why, eventually she gave in and told me that people had been making comments to her about her fat dad (which was the polite version) my daughter was being picked on because I was overweight, wow! That was a big pill to swallow!

My decision was made, I needed to do something about this! My daughter was being picked on and with me being her sole parent if something were to happen to me what would happen to her? So, I contacted a few different companies to look at options and price which is when I came across the National Obesity Surgery Centre, I can honestly say the people at NOSC were very helpful, understanding and they gave me lots of clear and precise advice, so I decided to go with them.

Firstly, they booked me an appointment with a consultant at a private hospital close by which went really well, I opted to go for the Gastric Band but I was told I would have to lose some weight before I could have the operation, the reason being was my liver was too large for the surgeon to place my Gastric Band safely. A few months later with their help I had lost enough weight to have my procedure.

The day of the surgery arrived, I turned up at the hospital with understandable nerves but the staff at the hospital were amazing and I quickly settled in, from every nurse to the surgeon who kept me up to date and took the time to explain exactly what is going to happen and helped answer any last questions I had, I also received a visit from the anaesthetist who explained about my anaesthetic.

After the surgery I received daily support from the NOSC team, then after that regular calls but you can also call at any time as they offer lifetime support to help you reach your goals!

My weight loss has been amazing and the best thing I have ever done for myself and my daughter. I have lost 13st in total from when I first started! The band is no quick fix as you have to follow the advice from the NOSC team and work at it, this being said utilising the support is a massive help and trains you to stop you eating big portions and helps you focus on eating little and often and the right foods that you can easily digest. Gone are the days of take aways and kebabs I simply can’t eat them!

My life is so much better and I feel amazing, I actually weigh 16 and half stone and I’m still losing more, I want to lose another 2st which will take my total loss to 15st, not bad considering at the beginning my target was set at losing 10st and I have now surpassed my expectations! Reaching my goal has changed my life!

I would recommend the NOSC and the gastric band to anyone that is considering that procedure or thinking about using their company.

Later this year I am doing a charity walk to the top of the “big one roller coaster” in Blackpool which stands at 220 Feet high! That’s 420 steps, 2 years ago I couldn't make it up the stairs in the house without stopping.